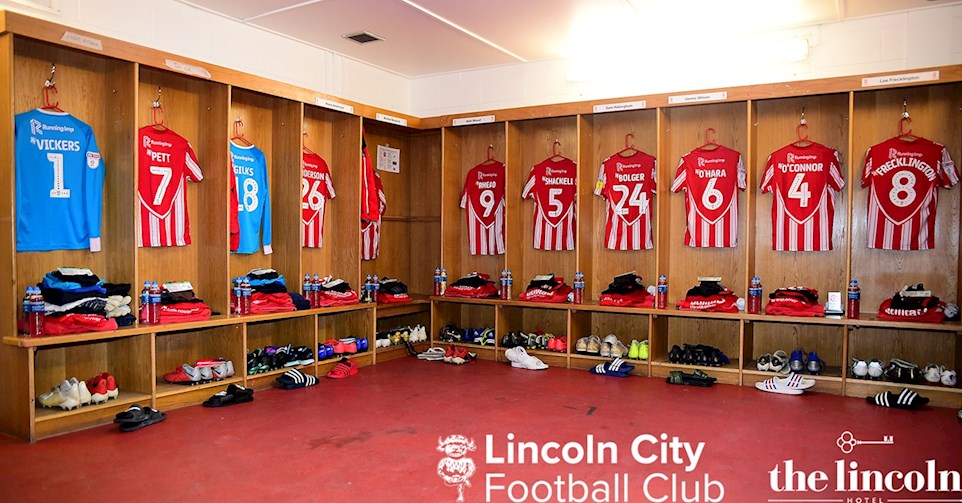 
The team news is in ahead of kick off at Sincil Bank as City take on Cheltenham Town this afternoon in SkyBet League Two.

City will be playing League One football next season after sealing the deal in front of the highest Sincil Bank attendance of the season. The Imps sealed their promotion to League One as Mansfield Town failed to win at Northampton Town.

Shay McCartan had given City a first half lead before sub George Lloyd levelled for the visitors, but despite not tasting victory, the result in Northamptonshire meant City are up.

The sun was beaming down as the game got underway in front of a packed Sincil Bank, City starting the game with the same eleven that defeated MK Dons last weekend, whilst the visitors included former City defender Sean Long amongst their starting line up.

Cheltenham packed their defensive third from the off playing five at the back and four in midfield, leaving The Imps a real tough task to breakthrough in any area as there was so little space. City were looking to move the ball quickly and incisively; Shay McCartan was lively in attacking areas and he almost freed Harry Anderson down the right but a combination of Ben Tozer and Chris Hussey snuffed out the danger.

The Imps were dominating possession and controlling the game, passing quickly on the slick surface and the first half-chance of the game unsurprisingly went the way of the home side. Harry Toffolo pinged the ball into the box where McCartan chested the ball down to John Akinde who just managed to get a shot away under pressure but he couldn’t direct it goalwards.

Mark O’Hara was the next man to drive City forward, his direct burst in midfield allowed the ball to be worked to Anderson, he was brought down for a free kick out wide on the right. Neal Eardley delivered and Akinde leapt highest but again, the visiting defence did just enough to put City’s top scorer off and his header drifted over the top.

However, the home faithful didn’t have much longer to wait for the opening goal, McCARTAN taking up possession around 25 yards out, he skipped away from his marker to shoot low, it skidded off the turf and appeared to catch Scott Flinders in the Cheltenham goal unaware and despite his best efforts to keep it out the ball nestled in the corner.

The supporters were now louder than ever in their support of The Imps with people now daring to dream of League One football but The Robins weren’t in generous mood as they pressed forward with Rakish Bingham looking dangerous on the break. Cheltenham broke quickly following a City attack, playing the ball to the Number 27 in yellow who created space to shoot but found Eardley in the way as the ball looked to be heading on target.

The Robins went a little closer with just under 30 minutes gone, a free kick played into the back post crept close to Billy Waters who was rushing towards the goal line but The Imps cleaned up as Matt Gilks took control.

Akinde showed his marker a clean set of heels with a neat turn on the edge of the box, he found McCartan who then did the same but was brought down leaving the officials no chance but to award City a free kick. Eardley lined it up, and curled it delightfully up and over the wall but it went agonisingly over the top just clipping the roof of the goal leaving City’s right back with his hands on his head.

The Imps continues to largely be in control and Akinde was close to getting the second just ahead of half time, Pett sliding the ball through the striker who got his shot away but it was blocked by the outstretched leg of Will Boyle who threw himself to turn the ball out for a corner. The resulting flag kick was hammered in low and hard, dummied perfectly by Jason Shackell and O’Hara turned it goalwards but Flinders was in the right place to save.

Cheltenham started the second half quickly, Bingham close to heading home a cross within a couple of minutes of the restart but it was well defended by City meaning that Matt Gilks remained untroubled to this point.

Hussey did well down the left for The Robins to win a second corner in the opening five minutes of the second half as his attempted cross was well defended by Anderson, then O’Hara and Shackell repelled another Cheltenham attack. The Imps’ supporters tried to rouse their players as Cheltenham were having their best spell of the afternoon so far.

City however weren’t to allow their feathers to be ruffled, and were once again to get back into the ascendancy possession wise.

The Imps brought on Danny Rowe and Lee Frecklington for Bruno Andrade and Shay McCartan respectively as they continued to knock at the door but the next opportunity was to go the way of the visitors and they took it.

A cross from the left by Hussey was powerfully met by the head of substitute, George Lloyd who thundered a header home beyond the despairing dive of Gilks. Despite the disappointment, the home supporters were back off their seats urging their side forward for the second goal which they’d arguably deserved up to this point. Hussey was doing his best to again quieten the City faithful as he crashed a shot wide at the near post, then up the other end Rowe somehow got around the back of the Cheltenham defence but with the angle tightening and Flinders haring off his line, Rowe’s poked effort squeezed inches wide of the far post and out for a goal kick.

City poured forward as the game went into the final ten minutes, Akinde got a cross away with Anderson coming into the picture at the back post but Flinders just got his hand to the ball to deflect it from danger. Then Hussey had a chance at the back post as play quickly went from one end to the other, the left back ghosting in to space to shoot over the top.

Akinde then forced a corner as the game was played at breakneck speed, with just five minutes left as the players of both sides somehow summoned every ounce of energy they had for what could be a grandstand finish.

With results elsewhere still meaning that as things stood City would be promoted, eyes began to look for final whistles being blown around the country as well as the referee bringing the game to a conclusion at Sincil Bank.


The team news is in ahead of kick off at Sincil Bank as City take on Cheltenham Town this afternoon in SkyBet League Two.